That ’embroidered wedding sampler’ seemed to take up so much of my time over the past couple of months it seemed as though reading was way down on my ‘things to do when I have the time’ list.   Having said that I did manage to hurtle through a couple of fairly new release books that really took my fancy.

One was recommended by my daughter in law and the other was a quick pic off the library shelf – which coincidently was how dil described the one she recommended.  We all know quick pics can be good or bad – bit like that movie quote ‘life was like a box of chocolates, you never know what your gunna get’ – I’m not sure about you but I’ve had some good ones and also some real duds lol

In a nutshell it’s about a little boy (Lockie) who went missing from the Easter Show, his parents, the local policeman and a young runaway called Tina.

A long time ago (1966) when we (dh and I) were much younger and much more trusting we once ‘mislaid’ a little one of ours in a market – both of us assumed the other had hold of her hand.  Round and round we walked looking for her, a stall holder approached us and asked if we were looking for a small child, then told us a policeman had taken her away in his car to the local station.  We found our ‘little girl’ sitting quite comfortably behind the counter eating chocolate biscuits – we were relieved that she’s been found and (as embarassed as I am to admit it) maybe naively hadn’t worried about her safety at all.  I’m not sure how I would have reacted if like Lockie she hadn’t turned up soon after she slipped away.

A thoroughly good read about life and families and how we react and relate to each other in all sorts of situations.  All I can ask is you read This review as it’s far better than one I could ever write.

My quick pic was a novel by S. J. Watson called Before I go to Sleep 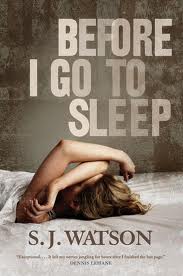 This went to Perth with me the other weekend – and if it hadn’t been for the fact we had ‘broken days’ when I couldn’t read it would have been finished much sooner than actually happened. When I had time on my hands I picked it up and was very reluctant to put it down.  It was in my hands so much I was almost antisocial at times lol

When the main character (Christine) wakes each morning she has no memory of life ‘before she went to sleep’ – a husband cares for her and unbeknown to her husband she has treatment from a doctor (Dr Nash) who askes her to write a diary each day ‘before she goes to sleep’.

As I said such an easy book to read – you (and Christine) learn about her life and relationships from reading the chapters which are actually dated and lead up to actual time the book began.  Not flash backs – which as you all know I loathe – but the story unfolding with each day.  Sounds intriguing – things aren’t quite as they seem – you have to read it to understand – watch out for the surprise ending tho!

It seems the book has been a success since the word go and in his blog the author says there is even a film/movie deal in progress with Nicole Kidman in the lead role of Christine.  Not bad for a first book – he also mentions he has another one on the go.

Right, I’m off to the library now
will see what else I can find to keep me entertained
Cathy

5 thoughts on “Good Reads – at least I thought they were”