I’m not one for going to see film adaptations of best selling books…. I’ve been known to sit there in the cinema muttering ‘that’s not the way it was in the book….. so often say no when asked if I’d like to see XYZ.

However there is the odd time I will go along, usually when it’s been a while since I read the book and (hanging head in shame) don’t actually remember all the characters and goings on that took place.  When that happens I can sit there and actually enjoy the film without pulling it to pieces. 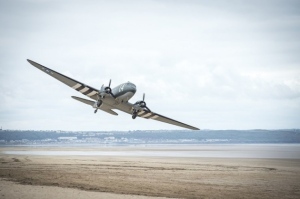 called a Dakota or DC3 landed on a beach and The Golfer nudged me asking if I remembered flying in one of them.

No, when was that?

1964 from Singapore to Penang!

How could I forget that!

Many years ago, almost another lifetime ago, I was the daughter of a serving airman (yes an airforce brat – ‘Born Raised and Travelled’) and then went on to be the wife of a serving airman – for the first 30 years of my life I was associated with service life and all it entailed.  Over the years I’ve flown in loads of different types of aircraft but couldn’t remember this one with it’s propellers and bulky almost clunky look.

The Golfer had been posted to Butterworth (on the Malaysian mainland across from Penang Island) and we arrived in Singapore tired and weary from the very long flight from Stanstead…..no non stop flights in those days meant a long stop over in Colombo on the way which lengthened the journey.  The plane we flew out on had been full of servicemen with just a few families so no restrictions on staying in your seats in those days meant I had plenty of babysitters for the two little ones we had with us. We’d expected to stay overnight in Singapore and were surprised when told there was an aircraft going up to Butterworth fairly soon and we were on it.

Now in my defence it was dark and very hot when we’d arrived in Singapore, the temperature difference between the cool almost cold March in England and hot moist tropical right on the equator that greeted us was enormous and I was trying to cope with two tetchy children so didn’t take much notice of the size and shape as we trundled up the steps.  It was an ‘aeroplane’ and that’s all I was bothered about 😊

I’ll tell you what though- I certainly remember stopping in my tracks when I saw what the seating was and how it was arranged!  About a dozen Air Force personnel and my little family sat sideways on – paratrooper style (2) on the jump style seats that lined the inside of the ‘plane.!!  And yes, that is the door to the cockpit at the far end 😟

My life has been nothing but interesting – well, the bits I remember 😊😎

It’s early Monday morning.  I’ve been sitting here thinking about past times for quite a while – best start thinking about tonight’s dinner or The Golfer will be home from ‘you know where ‘ later on and I won’t have a clue what to feed him.

Is Monday a musing day for you – or is it all go go go?

21 thoughts on “How come I didn’t remember that….”