You’ll discover things will change right in front of your eyes!

October is birthday month for both of us so more often than not we have
‘lunch at the golf club to celebrate ‘.
(sadly not this year though)

Lunch at The Golfers favourite home away from home in Healesville
(a short 30 min drive up the road) is always special
The food is good – the views from the terrace even better.
A table at the window a must.

October 2016 ……at 12.43pm we saw blue skies
along with some cloud build up over Mt Riddell and the nearby ranges
(which are part of The Great Dividing Range)

Eating, drinking and enjoying ourselves we didn’t notice what was happening outside
This was the scene at 1.16 pm – just half an hour later
Big black storm clouds overhead
changing the look, the mood and the outside temperature

And here we are one hour later (2.26 pm) misty grey skies.
very wet underfoot but much calmer.
(don’t you love being able to know exactly…to the minute….when photos are taken)

I’ll tell you what though….I was really glad parking was under cover
when we finally left for home it was pouring again

And just out of curiosity I looked at historical weather information for October 2016……..cooler and wetter than average……especially east of the city😊.
http://www.bom.gov.au/climate/current/month/vic/archive/201610.melbourne.shtml

Linking to Skywatch Friday – where the sky’s the limit.
Also – Travel Tuesday – My Corner of the World – Our World Tuesday.

What with one thing or another I’ve been feeling moody all week
It’s been continually raining and we still can’t go far….5km ruling
to do or even look at anything different
So what better thing Is there to do when you’re moody and can’t go anywhere.
What else but look at …..

Clouds
A collection of tiny drops of water or ice crystals so light they can float in the air!

These clouds were seen in Far North Queensland – in Glacier Bay Alaska –
and close to home in Victoria
Fascinating to look at – hard to capture – do you look at the land or the sky?
~ ~ ~ ~

This was what we saw two years earlier (2009) on a trip further north to
Charters Towers Qld
The whole of the town spread out below us….under a cloudy sky

If you are interested there are several basic sites online
with easy understandable information
http://eo.ucar.edu/webweather/cloud3.html.
http://www.weatherwizkids.com/weather-clouds.htm

The sky and the sun are always there. It’s the clouds that come and go.
Rachel Joyce

~ ~ ~ ~
Photos will enlarge with a click
Linking to My Corner of the World
Linking to Skywatch Friday – where the sky’s the limit!

We were  on our way up to Echuca  earlier in the year when I took these photos of a sky full of strange clouds.  I’ve no idea of the formation names but some were fluffy – some low lying in the distance  – some streaky where the sun was trying to burst through. 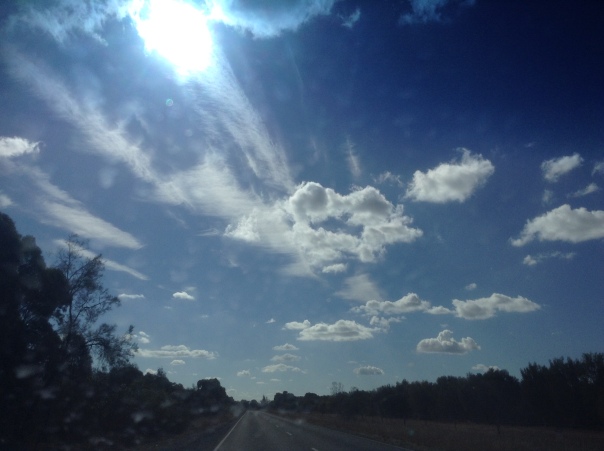 A bit further down the road the look of the sky had changed a bit.  More blue sky – more open – not so ‘crowded’

Thats when I said to The Golfer – ‘you know that saying we often use about flying pigs, well I reckon other animals can do it as well’

‘What, as well as the cow who jumped over the moon’ was his reply 😀

‘Just look out there –  can’t you see it floating around in the sky?

One Scottie dog laid on his back, legs in the air, wanting his belly rubbed.

Well that’s what I saw – what about you😎

Fun Friday – the day you forget the worries of the week.

Will be back on Monday – see you then