Unlike some of my coffee drinking friends, my very good friend the librarian didn’t think I was strange when she heard about my reading challenges for this year. ‘Are you up for another one?’ she asked, ‘do you mind what genre the books are?.  If not I’ll keep my eye  open for some you might be interested in’

I had two recommendations for an A and a B one word title sent in an email- put them on hold please I replied. 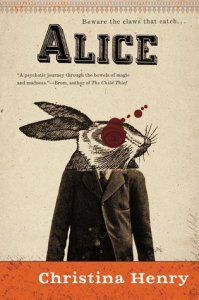 The first one Alice by Christine Henry  is described as:- A mind-bending new novel inspired by the twisted and wondrous works of Lewis Carroll

Book Blurb :-  In a warren of crumbling buildings and desperate people called the Old City, there stands a hospital with cinderblock walls which echo the screams of the poor souls inside.

In the hospital, there is a woman. Her hair, once blond, hangs in tangles down her back. She doesn’t remember why she’s in such a terrible place. Just a tea party long ago, and long ears, and blood…

Book Blurb:- This novel, by the author of Oscar and Lucinda, tells the story of a man who, recovering from death, is convinced that he is in hell. For the first time in his life, Harry Joy sees the world as it really is, and takes up a notebook to explore and notate the true nature of the Underworld.

i saw one classed as Horror/Fantasy – the other as Satire/Black Humour in the form of literature.

Both arrived the other day but I haven’t picked them up yet,  I’m trying to finish off my February female first 😊

How about you.  Are you reading anything out of the ordinary ?

7 thoughts on “What ya reading Wednesday….”