Has been a funny old week

Windy with firebans….Stormy with hailstones as big as golf balls

There was time spent in garage trying to sort out the mountain of knitting wool I have in boxes out there.

I’m torn between using all the odd half balls to make something striped or use them as a second colour along side some full balls.  Trouble is you have to almost look at the whole lot at the same time – have the ‘stuff’ in front of you so the ideas can form.

So, indoors It all came …..where I was more comfortable…..and I actually came up with something.  I’ll show you when it’s finished  😊

Then of course having signed up at the gym

I needed to work out the best time to go and an action plan of what to do when I was there.  I teamed up again with a lovely trainer (Shona) who’ll be a great help where the back is concerned.  But then there’s all this extra weight to be considered – losing that will be a step in the right direction.

Walking is gentle exercise they say – do it on the treadmill as a warm up…..trouble is it’s when I’m walking that my ‘disability’ makes itself known so it’s the bike….trouble is my spine feels compressed perched on a seat like that…. so it’s on to that lovely invention The Recumbent Bicycle.  Exercising in a relaxed seated position felt quite strange to begin with but alls good now 😎 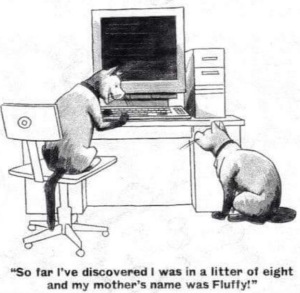 brought more discoveries.  My father’s paternal line arrived in Ireland in the 1700s as Palatine migrants seeking a ‘more peaceful life’.  Then over the years so many of those settlers moved on, escaping the hardships of life in their adopted country , to other newer countries who were also opening their doors to people seeking a better life.

I had a little chuckle when a ‘cousin’ sent me the cat cartoon.  I spent one afternoon clearing out a lot of pedigrees….not human pedigrees…but ones from my kitten breeding days.   I decided it was time to clear out all the related paperwork I used to supply to new owners because if I go before The Golfer neither he nor the children will want that extra burden, so it was ‘walk down memory lane’ and then toss into the recycling bin.  May have to start on all the cat/kitten photos some time 😊

That’s a little look at the fun times I had this week.

How was yours?  Did you have fun too?