Well maybe that should be……wear different shoes next time:)

Last weekend was spectacular – Friday night we had a storm to end all storms.

Residents in Melbourne’s east are clearing up following a night of storms that delivered heavy rain and large hail to parts of Melbourne east.
A severe thunderstorm warning was issued for the outer east and a flash flooding warning was in place for flash flooding suburbs including Mooroolbark, Chirnside Park, Croydon, Croydon North and Wonga Park

More strong winds and rain on Saturday meant I was looking for a nice quiet Sunday; so it was with a ‘hopeful nature’ I got on the train to go to the city with The Golfer.  The Melbourne Food and Wine Festival was on and he wanted to walk Southbank browsing the Food Vans, the pop up restaurants along with the wine tasting booths.

What he hadn’t mentioned was:- 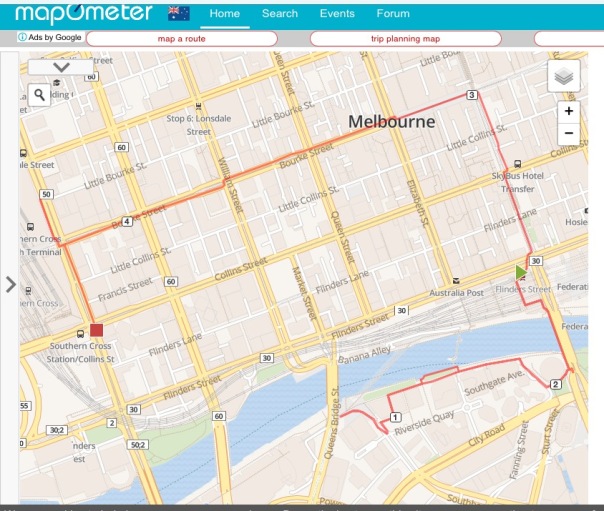 So when what I thought was going to be a pleasant saunter from Flinders Street Station, across the river and then a wander along the riverbank turns into a 5km hike in city streets I became a tad tetchy 🙂

Thankfully our train home could be be picked up right there at Spencer Street (now known as as Southern Cross…but I don’t know anyone who calls it that.
My feet were sore and all I could think of was getting home and putting them up

All’s well now, we are talking again- but next time it will be blow the fashionable summer sandal look and on with the runners!!