A very dear friend of mine was talking to me about her youngest child – now a grown man in his very early 50s – it seems he tells her she should ‘let go’.  She says that out of all her children he is the only one who does so. Don’t know why, she said, could possibly be something to do with his wife;  a person with few personal possessions who has fashioned their home in a minimalist style.  Because it certainly wasn’t his style when he was a young man living at home 😊

‘Get rid of it, it’s only taking up space, when are you going to use it again’.

That seems to be today’s catch cry.

And like many others over these past few years, I’ve done just that.  Moved on, passed on, given away, rehomed, knowing someone else will be able to make use of all the crockery and cooking stuff that’s no longer used – just the way we did when we were younger and short of cash to buy brand spanking new.

So what do you do when these emerge from the back of the cupboard?  Four small child sized plastic beakers with another styled as a lid to hold them together.  One set slightly larger than the other. 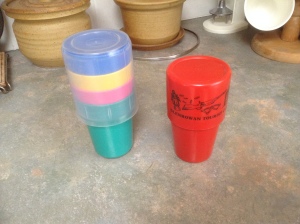 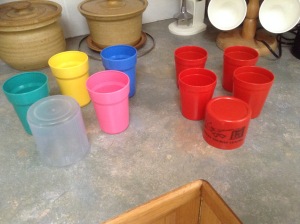 I looked at them on the countertop, reliving memories of the day the red ones were bought (way back in the 1970s) in a tourist shop at Glenrowan – Ned Kelly country – over 225kms/140 miles up the road from here.

It’s quite funny in that I know where they were bought – I can see myself walking into the shop,   I know why they were bought – squabbles over sharing a bottle of soft drink. ‘He/she had more swallows than me’   But I can’t for the life of me remember why we were so far from home that day !

Unlike these days when each child has their allocated water bottle,(well before water in bottles was sold at the supermarket) we’d buy a large bottle of whatever they chose…Fanta or Lemon Squash or even Coke……to share between us …..which meant those little red beakers certainly earned their keep.  Everyone knew exactly how much pop each of them was given😊

And of course as they grew in age and size…. I bought the slightly larger ones

My friend asked if they’d ever been used again.  Actually yes I said,  quite regularly a while ago by visiting grandchildren – small children being allowed a forbidden treat of fizzy drinks at Grandma’s (with parents permission – wouldn’t have done iit otherwise 😀

So here it is Monday morning again and I’m sitting with my coffee thinking about or maybe that should be wondering when it will be time.

Time to let go, that is.

You know, those little beakers really don’t take up much space, and even though they appear to be empty are actually filled with memories, and besides,  all those grandchildren are now old enough to have their own little ones so you never know when they might come in handy again 😎

Do you have things tucked away waiting?
Waiting for you to decide when the time is right?