Which means it’s time for another Victorian State Election.

Election Day is when you actually see your neighbours long enough to say Hello, get to see people you knew from years ago and haven’t seen in four years, get to see people who obviously know you because they come up and say “Hello” – you say “Hello” back even though you have no idea who they are and then realise they went to school with your children.  And then realise they have their children with them – not little children but adults old enough to vote.  How did that happen lol

Most of that (and more) is before you’ve arrived at the school gates, before you’ve run the gauntlet of party faithful volunteers handing out how to vote cards, before you’ve ogled the cakes on the cake stall or smelt the sausages sizzling away on the barbecue.  All jolly good fun as long as you remember why you’re there.

Once inside the polling station there’s the line up to get your name marked off the electoral roll and receive both your ballot papers – voting is compulsory here in Australia – well it’s compulsory in that you must turn up and be marked present.  You can be fined if you don’t have a good reason for not doing so.  Of course early voting is available – but not online, it still has to be done in person.  Also you can vote at any other recognised station ‘out of your electorate’ so no worries if you can’t get to yours between 8am and 6pm.

Ballot papers in hand, it’s off to those little cardboard booths.  One thing to remember though is – don’t Tick the Box – your vote won’t count

Because it’s a preferential voting system and not a ‘first past the post’ one, the boxes beside candidates names need to be numbered. The Lower House (Legislative Assembly)  is usually straight forward- mark it the way your preferred candidate suggests which is why (unless you have thought about your vote long and hard and have a very good memory) it pays to accept one of those how to vote cards being handed out in front of the school gate 😊

But watch out when you come to the Upper House (Legislative Council) – ‘cose that’s when the fun begins.  You’ll look at the  long sheet of paper and wonder what it’s all about.  Thankfully the Electoral Commission provide guidelines 😊 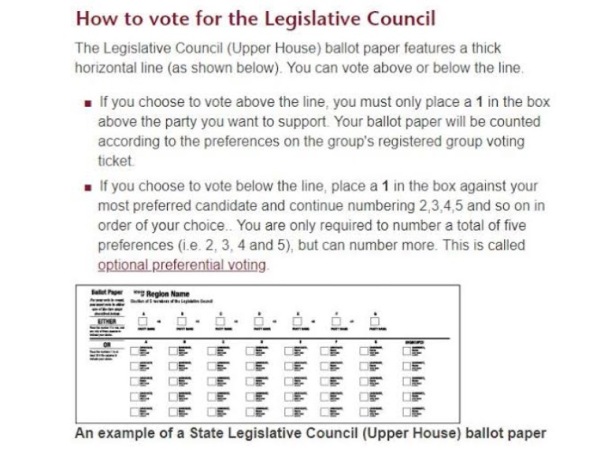 From very early Saturday morning The Golfer once again will be busy doing his duty working in a polling station at one of the local schools.  There’s quite a selection process to go through for these (paid) positions, one he went through many years and with each election there’s more ‘retraining’ so he’s been tucked away recently huddled over his Victorian Electoral Commission work book answering questions online.

I’ll vote early before the rush and spend the rest of the day wondering (as I have been doing ever since this campaign began) where are they – all the political parties involved- going to come up with the money to provide Victorians with all these new ‘things’ they are/have been promising?  Who is going to lose out when their funding is cut so money can be diverted to these new projects?

Only time will tell I suppose, so remember folks – just be careful what you wish for.  It may not turn out to your liking!