Even though we are in the throws of ‘gathering things together’ for time away in November lots of little chats have been going on here at home about whether we’ll have a ‘big’ holiday next year (or not) because with the cost of travel being what it is – expensive – we usually try to fit as much in as is possible.  We aren’t that well off and it often takes a fair bit of planning for some things to happen but so far it has been achievable

The other thing discussed is what time of the year shall we travel.

Early in the year outside of Australia is usually cool…..later is warmer.  Early is cheapish….later more expensive   Oh decisions decisions 😊

It’s often the later trips that provide the most entertainment.

I was talking to a friend about that trip a couple of weeks ago and she mentioned the Polar Bear mother and her cubs in the Frozen Planet series made by David Attenborough. I laughed and said ‘that was on tv just after we got back from seeing more of the same’  All that planning…..and saving …..had allowed us to vist The Golfer’s family in Nova Scotia with side trips to Newfoundland and Alaska during September/October 2010.

We were in Ketchikan Alaska when we came across this big brute.
I can’t remember which store it was in but look at the size of it.  Take it down on ground level and it still would make The Golfer look short.
You wouldn’t stand a chance if he caught you by surprise and you certainly wouldn’t want to shake him by the hand 😊 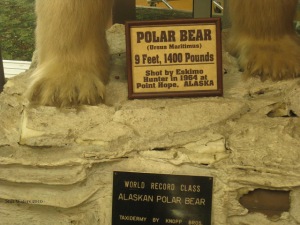 This one who looked more like a cub than an adult was reclining on the floor of the Grenfell House Museum St Anthony which is up on the far northwesterly tip of Newfoundland.

People were saying how lovely and soft and cozy he looked until they had a proper look at the head.  Even as small as it was by comparison I still thought those teeth were on the large side Lol 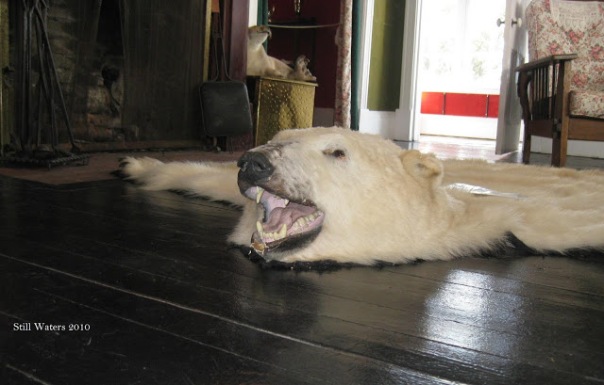 Another beauty lives in the Durrell Museum in Twillingate which is in the northeast of the province.  This stance really does give you an idea of being up close and personal with a Polar Bear.  Look at the size of those claws!! 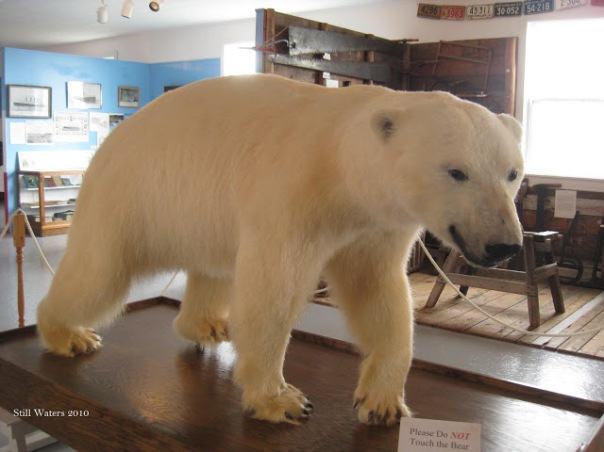 And this is the Frozen Planet episode I referred to. I’m hoping the Summer link works.  If not try the veoh url

The polar bears are at the beginning, finishing about 10 mins in and if you don’t want to watch the whole episode do fast forward through to about 10 mins before the end.  There’s a section called Freeze Frame which shows (and explains the ins and outs of) the crew filming – very interesting.

Linking to – Our World Tuesday

10 thoughts on “Polar Bears we have met on our travels…”