It would appear that while we were away during April a new set of neighbours brought a cat with them. One who liked to roam and one who obviously thought our back garden and all the pleasures to be had there were his and his alone.  All this time poor unsuspecting Kiera was languishing away in her holiday home just down the road.

I thought it odd when she wouldn’t stay outside during the day – this was on warm  sunny days early in May not like the recent cooler ones.  Then I caught her at the glass  back door growling and having a hissy fit at the offender who was sunning himself right there on our back deck.

Take today – after all my complaining about the miserable weather we actually had a dry clear sunny day. I tried to put her outside to enjoy it and she promptly turned round almost in terror to push her way back inside. 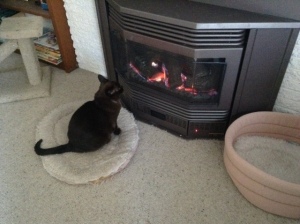 It was almost as if she was looking to the fire for an answer.

Answer me, oh my love.  Just what sin have I been guilty of?

Why me?  I’m just a little old lady trying to enjoy the twilight of my life ??

Anyway I don’t mind her being inside when it’s yuk outside but I drew the line with today’s weather.  So I popped her in the old cat pen at the bottom of the garden – that way she could catch the rays and feel ‘safe’ at the same time.  Wouldn’t you know it,  she obviously didn’t feel it was a problem being outside at all because she promptly fell asleep 😊😊