After my rejoicing in the sunny hot day we had last week the weather sort of went downhill from there.  Two scorchers turned up – higher temps than even I enjoy.  Heat humidity pouring rain and an evening event in the city don’t go together. As we arrived at the Tennis Centre early Monday evening the heavens opened up again, oh, the squeals and cries from the ‘girls’ leaving the car park, trying to handle umbrellas with posh long frocks lifted high so they didn’t trail in the puddles. Yes, it was year 12 graduation night for a granddaughter’s school- another one is now out into the big wide world.  The years are going by so quickly and of the eleven grandchildren we now only have two youngsters at school. 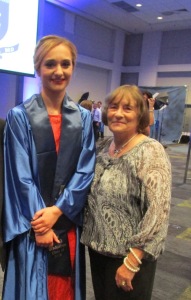 That last set of thunderstorms brought a strange phenomenon to Melbourne – all over the city people were suffering asthma attacks, so severe in some cases it caused several deaths,  I wondered why I felt wheezy all that evening when I’d had no symptoms for a couple of years or more and then the next day learned it was called thunderstorm asthma – you can read about it http://www.gizmodo.com.au/2016/11/what-is-thunderstorm-asthma-and-why-is-it-worst-in-melbourne/ here. and http://www.theage.com.au/victoria/thunderstorm-asthma-three-people-critical-8500-treated-in-melbourne-hospitals-20161124-gswkdb.html here

If we were having coffee I could tell you the weather changed again – back to winter!  cold and wet – cold enough to turn the heater on early in the day and return a wool blanket, back on to the bed.  One night I woke and wondered why I felt so cold –  5c/41f had me cuddled up to The Golfer, who thought his luck had changed 🙂

Mind you that hasn’t taken the fun out of this week.

If we were having coffee I’d let you know I have read no books, done no knitting nor visited any blogs but The Golfer did take me out to the pictures the other day – we went to see The Founder.  The ‘story’ of how Ray Kroc developed an initial idea from two Mcdonald brothers and turned it into the world wide chain McDonald’s or Macca’s as it is known here in Australia.  I’m not usually one to read reviews – I like something I see or I don’t – but this film had left a ‘bad taste’ in my mouth so I did look at some yesterday to see if anyone else felt the same way as me and surprisingly the person who wrote this one did – The Founder review by Jason Di Rosso 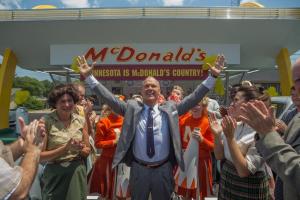 You’d also find out that two choir gigs in one day gives the lungs and the voice box a much needed workout.  It’s fun singing for (and with) much older seniors – so many of them might be incapacitated in one way or another but most seem to love music… It’s not unusual for ones who say little to be singing along and knowing all the words.  Not just the WW1 stuff but varied songs and styles.  They can get  quite emotional as well – one gent sat and crooned along to ‘Unchained Melody‘  then promptly dissolved in tears at the end.

Then, there are groups labelled as ‘over 50s’ who ask us to sing for them.  Often they ask for a song list containing more modern songs but this is always the final number.  Stirring and rousing and so so good to sing – ‘The Holy City’   ‘My’ Sing Australia choir (which I don’t think I’ve mentioned before) isn’t quite as large in numbers as this one but we strive to be just as good.

Find out about Coffee Share here – or Join in here https://parttimemonsterblog.com/2016/11/26/weekendcoffeeshare-recovery/