A few years ago (2010) while visiting The Golfer’s extended family in Nova Scotia we along with some friends took ourselves off to Newfoundland for a couple of weeks.  We spent a few days in St John’s where of course we were totally enamored with the painted houses that line streets of the older part of town. Rows upon rows of them! 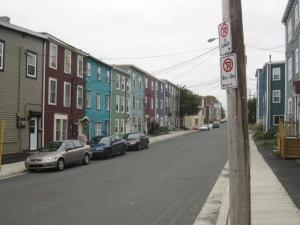 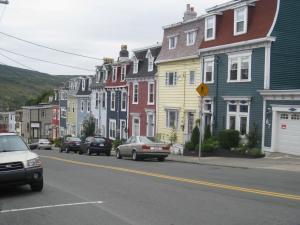 This selection was taken on a very cloudy day so the colours don’t stand out all that well but as well as noticing all the different colours my eyes were also drawn to the amount of windows I could see. Rows upon rows of them!!

Non of them outstanding to look at, mostly serviceable condsidering the weather they experience,  But oh so many of them  lol

Some were completely different to their neighbours,  looking as though the front of the house had been remodeled – then there were others that were probably a different style to each other from ‘birth’.

And those steep streets down to the harbour were lined with them as well.  Dormer windows galore.   Yes that’s a ship down the bottom.  Wouldn’t want to try walking that way when the paths were icy.

This corner house on Gower Street really did catch my eye.  Prime position, windows on both sides, providing lots of light and the ability to see down and across the street.  Dormer windows using the attic space here also.

And just for fun (or for a purpose) do you see the clever use of space this owner came up with.  A corner window cut right into the corner of the house 🙂 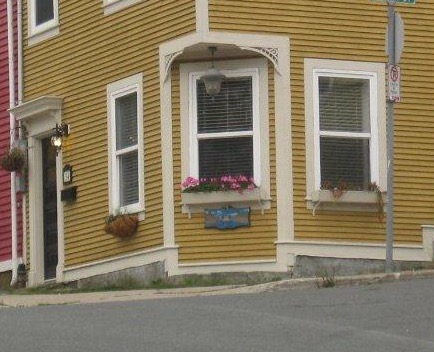 And what do we see about half way along?

Well, I’ll let you look and see for yourselves – sit back and enjoy the ride.

A blog hosted by Dawn Miller – this is what she says about the meme:-

A Lingering Look at Windows posts monthly on the first Thursday of the month. I invite everyone to post when and as many times as you would like. Tag this post and/or leave your link in the comments. For more information about this challenge please see A Lingering Windows Title Page for 2016