So I’m trying to use up  more of the ‘stash’ – you know, all the stuff you gather over time because it looks good and you know just what you are going to do with it.  Given time to come up with an idea that is 🙂

One back knit, one front knit and one sleeve – which for some reason I decide to sew together -my reasoning being it will enable me to get a better idea of the sizing because when you are playing around some times what the book says, what you actually do and then what actually happens can be very different things.

With several things on the go at one time I chose to work on something else over the weekend and come back to the pretty pink baby cardigan this morning.  Just one  problem, I did a bit of a clear up and the whereabouts of the piece of paper with all my calculations on is nowhere to be found

Note I said piece of paper and not the exercise book I usually use for this sort of thing.

It is not the easiest thing in the world to count stitches on lacy patterns especially when they are joined together so after much muttering, out cames the fine scissors and I set to work to take the pieces apart.

Patience is a virtue – one I obviously don’t have – especially when it comes to locating the wool used to sew seams together; made worse by the fact some seams joined pieces with holes near the edge.

Result – yes you guessed correctly.  Catherine ‘snipped/cut’ the wrong strand and had holes where there weren’t supposed to be holes.

Now to count cast ons,  rework the pretty pattern of one front, then get on and knit the other front and sleeve.  Oh and write my ‘workings out’ in my notebook – and perhaps next time (if there is a next time) add another stitch to each end to provide a wider selvedge. 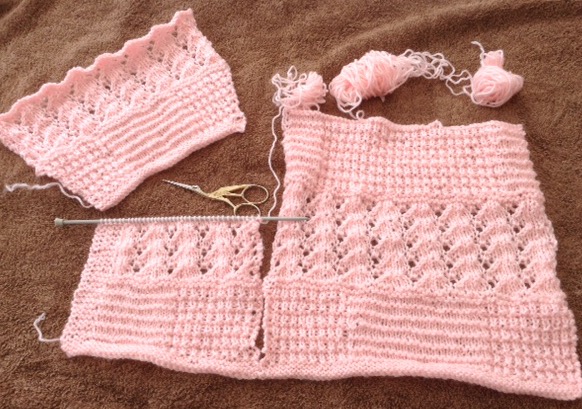 I’m thinking that to save me all this hassle from now on I’m going to jot those figures and thoughts down in my iPad notes as well as my handwritten notebook.

What do you think?  Double or nothing sound like the way to go?