Is It the Year of the Sheep, Goat, or Ram?

Actually, Chinese people are also not quite sure about that. In Chinese the word 羊 (yáng) is a generic term, and can refer to a sheep (绵羊), goat (山羊), ram/buck (公羊 male sheep or goat), 羚羊 (antelope), etc. There is a lack of clear definition on the zodiac “Goat” in Chinese history.

However, most Chinese people and experts on folklore believe that the Chinese zodiac animal is the Goat, not the Sheep, and they have some evidence to support their idea…
Find out more here

So it seems all three are OK but lets say that The Year of the Goat has just begun.  In Chinese astrology people born in this year are described as serene, calm, gentle and mild mannered.  It is suggested they should get out among nature and commune with the great outdoors. Fresh air, trees, and sunshine will do wonders for their health.

Well, ‘some’ of that could describe the lifestyle of these goats we saw last year when visiting my sister in Cyprus.  Arriving back at her complex just a short distance from the local village we almost bumped into this little herd who were making their way very determinedly across the road.

According to my sister they are called Damascus goats, although she had heard the word Shami used as well.  I must say it was quite calming to watch as they made their way across the scrub land behind the complex with the goatherd walking along with them. 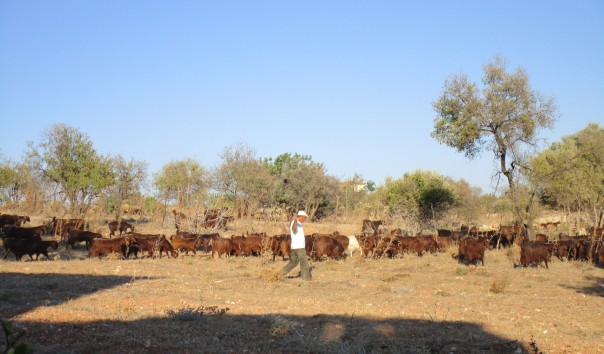 The local goatherd and his flock. Anarita 2014

When he stopped and pulled down a branch she said he was picking off juicy bits for some of the young ones.  I stood there for quite a while almost mesmerised as they made their way off to my right – answering his call as they moved off together all of them knowing where they were going.

The shadows were getting longer and as I slowly came back from my day dreaming I realised it was time for tea and a little bit of contemplation.     Haloumi cheese from goats milk is delicious – goat meat is a favourite meat of many Cypriots.  Were they milkers or were they being fattened for meat?

Linked to Nature Notes hosted by Michelle of Rambling Woods