One month earlier on 11 August 1914 a new chum had answered the call and enlisted in what was called the Australian Naval and Military Expeditionary Force. He had arrived in Sydney three years earlier after having served in the Hampshire Regiment of the British army so was well aware of what he was doing.  His regimental number was 194 so it’s safe to say he was near the front of the queue and raring to go.  He was a first cousin of my maternal grandmother.

The band played – colours were paraded

The armed Catafalque Party was there and banners were paraded 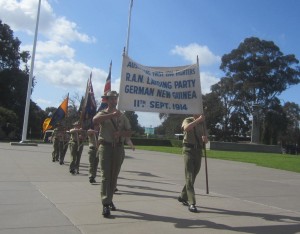 Politicians were visible – wreaths were laid

The Catafalque Party left – Soldiers and Sailors had been remembered

The Eternal Flame burned above the new plaque

As we looked back at the Shrine on the hill 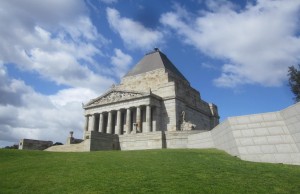 I thought of young James Bannister and wondered how well he would have done in Australia after the war had ended – sadly he never got the chance.
In January 1917 he lost his life on the battlefield in France

9 thoughts on “One hundred years ago today……”