We call the place where roads meet and cross an intersection.  Some are simple like T junctions or Y junctions/Forks or busy like some Crossroads.  Lots of busy intersections are controlled by traffic lights but there are others that require a Roundabout which is sort of like a circular intersection where all the traffic in one direction round a central island.

As you can see in this moving diagram (below) we drive on the left here in Australia so following the road rules means we give way to all traffic on the roundabout coming from our right.

This (below) is a diagram of a busy intersection close to where I live – it’s a series of roundabouts – in fact it’s three roundabouts – put there to supposedly allow traffic on five roads to merge without any problems or hassles for the drivers!  I would pass through/go round this intersection about twice a week – in both directions. 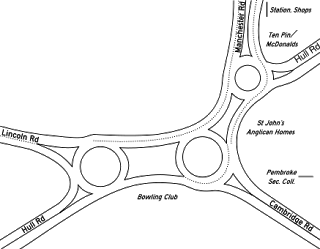 On my way out I’m usually driving down Cambridge Road (bottom right) needing to go round the big circle in front of me, then skirt the smaller one across the way to make my way down Manchester Road.  That means I would look to my right to see what’s coming down Hull Road and also what’s approaching the smaller ‘circle’ at Manchester Road.

That traffic could be turning left into Hull Road or left into Cambridge Road (where I’m waiting) or even carrying on past me.

Until I see their indicators I have no idea about where they intend to go or even if they know where they are going.

That’s if they have their indicators on at all lol

When it’s busy I sit and wait and also look across the roundabout to see if anything is making it’s way round it – any traffic at the roads on my right will have to give way and wait until it’s passed, in which case I have time to get onto the roundabout and make my way to my exit.

But wait – even tho’ I’m off and running and on my way round to Manchester Road I still have to keep an eye on traffic coming down Hull Road in the right hand lane because it could be turning right to go round the ‘little’ circle and into Manchester Road as well.  In which case I’ll have to stop at the road markings and give way to them.

However on those days when it all seems to be too much I’ve turned left and driven ‘back’ to the first roundabout (the one on my left) taken the right hand lane at the bottom of the Croydon end of Hull Road, driven past Lincoln Road which is on my left then sailed on past my usual ‘big one’ and taken the left exit into Manchester Road.

Only thing is that this method can have it drawbacks as I can get held up giving way to traffic coming round from Cambridge Road (the place I’ve just given up on because I couldn’t find a break in the traffic) and also got caught up in Hull Road traffic turning right.

I almost give a sigh of relief if I can see no other cars as I make my way down Cambridge Road – with several schools in Hull Road I try very hard to avoid the kiss and ride parent times before 9am and after 3pm!

The thing is you can’t win with this intersection – and there’s no point in chucking a wobbly and chancing your luck as right there on the corner of Hull and Cambridge Road (the building with the light coloured roof in the picture below) is the
Mooroolbark Police Station! 🙂 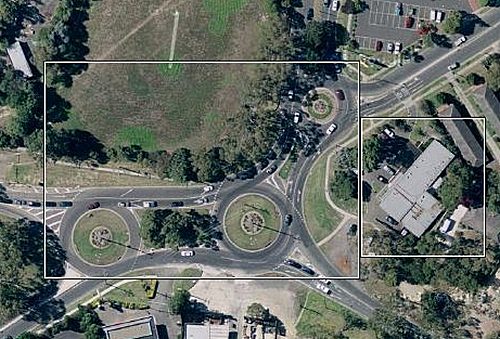 Five Ways
One of Melbourne’s unusual roundabouts – located between Hull Road, Lincoln Road, Manchester Road and Cambridge Road.  It consists of three consecutive roundabouts which if used according to road rules works well but can be quite daunting to those who do not know the area.  It was designed to eliminate accidents caused by drivers failing to give way to those coming from adjoining streets.
source