Andrew High Riser featured the Block Arcade in one of his recent posts which reminded me of how long it was since we’d actually slowed down and taken in the sights of Melbourne.
January 2010 to be precise!

After finishing off some business in the city The Golfer and I had some time to spare before heading home and found ourselves following the crowd into the Block Arcade.  Here in Melbourne we have several of these little quaint arcades in the city centre and this one has to be the best.

Block Arcade is a heritage shopping arcade in Melbourne Victoria.
Melbourne’s Golden Mile heritage walk runs through the arcade
It forms a short, narrow laneway, connecting Collins Street to Little Collins Street in the central business district of Melbourne.
It is also connected to Elizabeth Street in the west, thus, forming a L-shaped arcade and connecting to Block Place through to the Royal Arcade

Built in the 1890s – supposedly so ladies could shop in comfort (and safety) away from extremes of weather we get here in Melbourne.  Seemingly it was the meeting place of Melbourne with a reputation as the most popular place to been seen and shop.

“The arcade was a new shopping phenomenon – the arcade. Modelled on those developed in great European cities such as Milan, Paris and London, arcades were clean and modern, and protected the shopper from the heat, dust, rain and mud of the city streets.  Their architectural design facilitated new ways to display and purchase fancy goods. At this time, changes in manufacturing and higher wages made luxury more accessible than ever.  The modern shopping arcade enabled the buyer to indulge in the pleasures of looking, touching and contemplating goods without any pressure to make a purchase. Browsing became an accepted and expected pastime, and evolved into new leisure behaviour. A commodity that was no longer just a necessity but a thing of beauty, something to ponder and desire.”

Nowadays you will find lots of little coffee shops (one of the originals, the Hopetoun Tea Rooms is still there) and other rather expensive exclusive boutique type shops.

All very nice to look at – Enter if you dare lol

We were there at a busy time and there always seemed to be someone in the way so I couldn’t get any photos of the shop windows but look at the beautiful glass canopy up top (being early January the decorations were still there).
click to enlarge 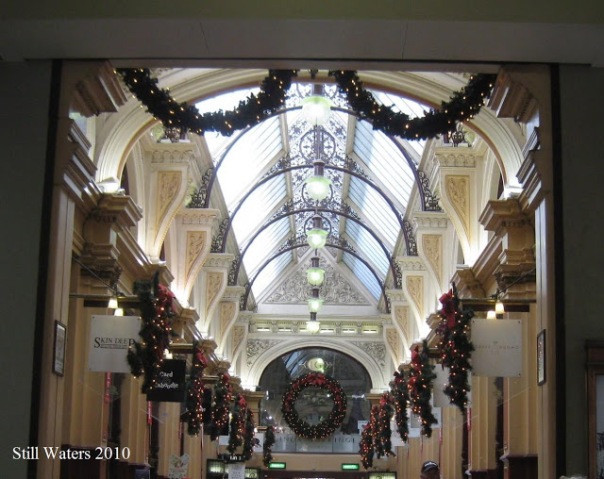 and this huge circular piece is at one end under the glass dome. 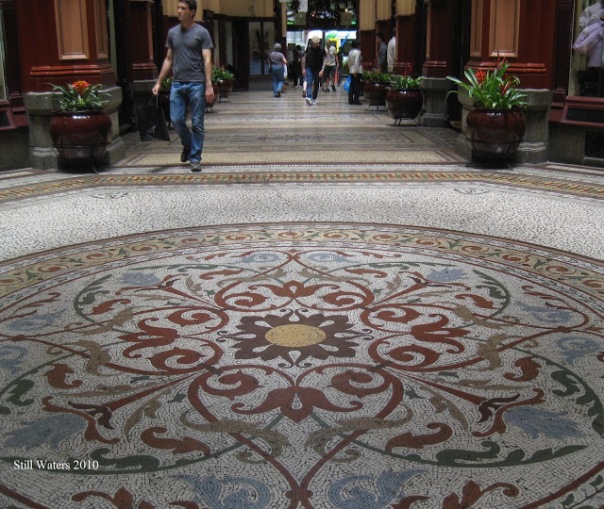 Haigh’s Chocolates have a fabulous shop at one end of the arcade where they sell their very exclusive hand made chocolates – the sort of shop I’ll never pass by.    Glancing in the window, the sprig of Wattle that caught my eye then the display above it.

That was when I remembered the saying:
A moment on the lips – a lifetime on your hips
and walked away 🙂

Links with loads of historical information and more beautiful photos:

8 thoughts on “Eyes down and looking…..”