Sometimes I wonder about that old saying about things happening in threes – good things come in threes, accidents and deaths come in threes, we say third time lucky and three cheers.  I’m not saying I don’t believe those thoughts but I really sat up and took notice and began to think about them when I saw the name of a television programme this weekend – which I’ll tell you all about later

I’ll set the scene by saying that instead of taking books with me on our latest trip I took my ipad – I’m not really comfortable reading from it but it seemed much easier and a lighter option to go in my carryon bag.   I’d seen a book recommended on an unknown blog (don’t ask silly questions like which blog, just lets say an unremembered blog) The Unlikely Pilgrimage of Harold Fry by Rachel Joyce and because of the unusual title I got the The Golfer to download it for me.

It’s about a man who hears an old friend of his is very ill and decides to walk to another town quite a way from where he is living in the hope that she will still be alive when he gets there.  Long and at times a bit ho hum it tells of how he copes with the journey, his attitude and feelings to the hardships he experiences also the people he comes across on his way and how he is a changed man at the end of it.

Now while we were away I mentioned the book in passing to a friend and she suggested another book with a similar title.  Called What the Psychic told the Pilgrim by Jane Christmas this is not a novel but a tale (true recording) of the pilgrimage she made in Spain along the Camino de Santiago de Compostela (try saying that in a hurry lol).  So very different (much easier to read) and yet quite similar to the other pilgrimage book this deals with similar hardships and attitudes and feelings Jane has to her fellow pilgrims as Harold had to his.  They both wanted to give up their treks but continued without all the fanfare around them and by the end both had ‘found love’. 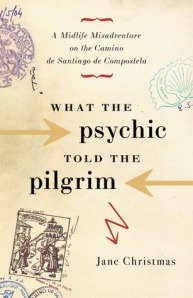 So what was on the tv that had me sit up and take notice – a three part series called ‘Pilgrimage’ with Simon Reeves – Part one To Canterbury was on SBS last Saturday 2 November with the others to follow.

Now I’m wondering about that superstition – true or false??