Well I did, sort of ……..just needed a little nudge lol
Try as hard as I could yesterday (see last post) I could not remember where I’d heard that refrain.
Inch by inch – row by row
That was until I read Liz’s comment along with the rest of the words and
hey presto – it all came back to me.

Seems my short term memory really needs a kick up the you know where because it wasn’t that long ago I was actually singing the words at a concert.

While we were away we stayed part of the time at a cousin’s house in Kingston N.S. and just up the mountain from where they live is a tiny local theatre.   Evergreen Theatre ( http://www.evergreentheatre.ca/) utilises the premises of an old disused church in Margaretsville and as well as ‘live’ theatre they also present ‘live’ music and that’s where we spent one of our Friday nights.
Read about the history of the theatre – http://www.evergreentheatre.ca/ShorelineNewsEvergreenArticle.pdf

Now you know my love of folk and also my love of Irish folk, well on the bill that evening were Kevin Evans and Brian Doherty who as their website  (http://www.evansanddoherty.com/)  says ‘are the best singers of Irish music around’.

It was a great night – many of their numbers were known to the locals – after all they are based in Halifax and well known all over Canada; however they did come out with quite a few of my old favourites which included  Lord of the Dance and Black Velvet Band – toes were a tapping and sounding very loud on the wooden floorboards – bodies were swaying and voices could be heard halfway down the street and at the end of the night the encore was Will ye go Lassie go aka Wild Mountain Thyme ( http://en.wikipedia.org/wiki/Wild_Mountain_Thyme) a favourite at our folk Club in Ringwood.  And of course sometime during the evening we all sang the Inch by Inch song written by David Mallett and sung over the years by many many people lol 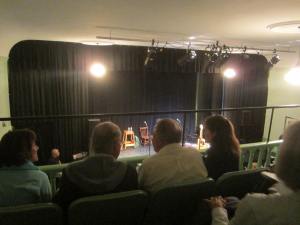 As you can see by sheer chance we ended up in our favourite seats at the back of the venue lol – look for my folk club posts  and you’ll see what I mean lol
Luckily there was a gap at the end of the seating so I could nip down those few steps to the front of the balcony and take a couple of piccies for my scrapbook.