Oh yes 2 days down on a 4 day drive – taxing to say the least.  Actually there seems to be a pattern to our behaviour during these long drives – this is not the first time we’ve ventured this far north and the same thing seems to happen each time.

Day one starts excitedly, we’re a bit hyped up having spent the last few days making sure we have everything ready and packed in the car so it takes us till lunchtime to relax and get into the swing of thngs.  By the end of the day all this catches up with us and we are glad to get to our first stop.  Day two we start to bicker – happens each time!

Even tho we have bits and pieces in the car (to read, craft and listen to) as well as snacks to eat I think it’s the effects of sleeping in a strange bed and the prospect of another long day on the road that brings on this stupidity – as thats what it is.

‘Why are you changing the radio station – I was listening to that CD, why are you changing it – why have you changed the heating/cooling – what do you mean keep both hands on the wheel – this one when you can see for miles ahead and there’s not another thing in sight!’  Silly little things.

By day three its back to normal again, it’s as if we’ve settled down into a better routine knowing and accepting there’s nothing we can do about the size of our great land and as we’ve chosen to drive and not fly thats all there is to it.  Day four the excitement is back again, we know we are on the last leg of the journey to our first destination and relaxation.

On this trip, the unusual changeable weather of the first two days (its supposed to be the dry season up there!)  hadn’t helped our emotions and attitudes so when we left Charleville on the third morning it was good to know we were back to talking to each other lol.  It was going to be a long day driving in the outback to Hughenden via Longreach and Winton (9 hrs) and seeing blue skies and sunshine and not rain and the fog helped – also knowing the countryside was going to be fairly flat and wide.  We’d spent some time travelling and visiting places along these roads three years previously so knew what lay ahead.

Looks very similar to above but was actually taken a couple of hours later.

It was a drive with lots of snoozing and quiet times but to bring us back to reality we did come across plenty of this along the way – road works in the middle of nowhere.  All the action was much further down the highway but they still needed the road clear of traffic at times.  There is so much road work going on in Queensland it could have a post of its own lol

And this was a really welcome sight at the end of the day.  What a change in temperature as well, instead of putting the heating on to warm the cabin we had to put the cooling on lol – had an early dinner of Fish and Chips along with an early night so we’d be ready for another day on the road in the morning.

Leaving Hughenden the next morning the sky seemed to have a very strange looking hue about it – such a quiet and peaceful rural look out there it was a shame to move on.

But on we had to go –
seeing the mysterious looking low lying fog
brought back memories of a couple of days beforehand.
This was how things looked at 8am

and oh dear, by 9am the real thing had emerged again lol 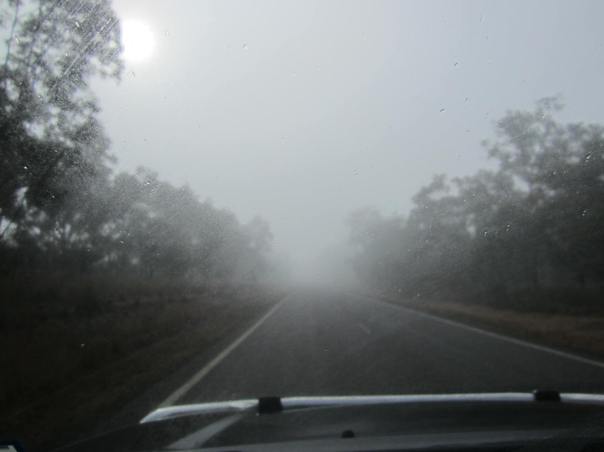 Charters Towers came and went and then it was onto the Gregory Development Road for the last leg of the journey to Mount Surprise.  Some travellers had warned us The Gregory Developmental Road is ‘a bit of a nightmare’, with a single lane in the middle of the road for much of the way with very soft shoulders on either side – now guess whose turn it was to take the wheel when this stretch of road turned up lol

Originally used by road trains and mines traffic but just recently tarmaced the idea is that you slow down and pull over to one side when the big trucks come by – they have right of way.  And I can tesify that ‘they’ don’t slow down for anyone or anything lol  Oh and the road doesn’t look like that all the way – there are great big chunks of it that are gravel or dirt !!

Now heres a few things to do to amuse yourself – when your camera is behaving itself.
Take pictures of your hat, the sound system and the temp guage.  And then wonder what certain clouds remind you of. 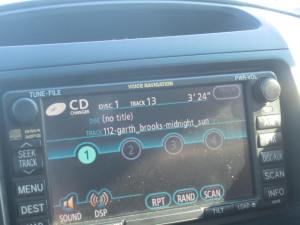 7 thoughts on “Now where were we?”