So we are off and running about 6am the first morning – I’m still half asleep at this time so traditionally Dh takes the first ‘shift’.  The rain was tumbling down – not a good sign to start the day, we just hoped it would clear up.  No luck where that was concerned, 2 hours up the road to Shepparton, time for me to take the wheel and it was teaming down.

Lets just say that for most of the next 7 hours this is what we saw.
A Very Wet Windscreen
with wipers moving continuously from one side to the other!

We ate our packed lunch in the car – we only stopped to refuel and change drivers, no pictures were taken along the way as I usually do when we are out and about, it was certainly not the best day’s drive in a long time.  At the end of the day we were quite relieved to reach Cobar, even there it was cold wet and horrible so we just ate a quick dinner at the pub and bedded down for the night hoping for better weather in the morning.

Next morning it looked good to begin with.  The long straight road out of town was dry and even though the skies were heavy above there was a promise of something nice on the horizon. 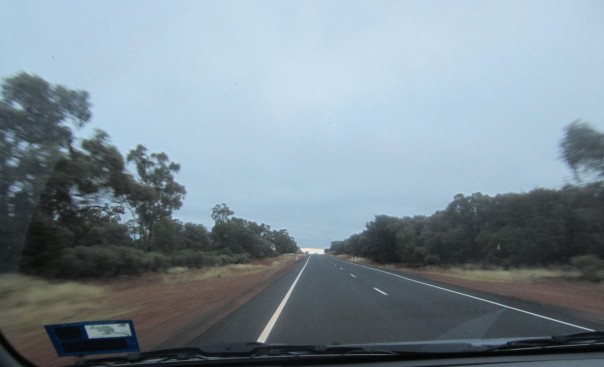 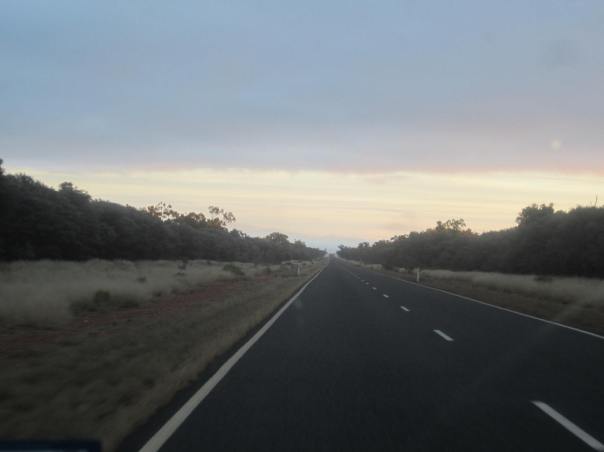 The scenery changed, there were wide open spaces – and there it was – a little bit of blue sky peeping out from behind those strange cloudy skies.

Oh and look the sun was there as well.  Yes, it was early and like me it *the sun* was just waking up, sitting low on the horizon hidden by cloud, but it was enough to make us feel we really were ‘on holiday’ now lol.

That was at 8am
– by 9am it had all changed –
the countryside is now shrouded in thick fog!!

Now you know those roadside signs (like the one below) that you see warning of unfenced areas where stock may roam across the road – they are all well and good when, like below, you can actually see the road ahead.

We definitely didn’t see the one warning that this mob
might be wandering across the highway lol
Roads still wet in places – thick fog
and bl……dy great animals appearing out of nowhere
can’t say we don’t have things to laugh about! 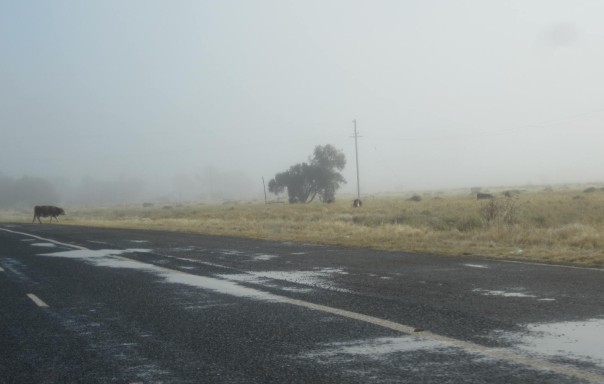 It was getting a bit grim there for a while but by the time we got to Cunnamulla just 120 kms north of the New South Wales / Queensland border and stopped for lunch it had all burnt off.   Which did make us wonder what we had been moaning about lol

So after being Fed, Watered and Rested we set off on another couple of hundred kms drive north down (or is the UP?) the Matilda Way, along the long road to Charleville with nothing on either side but the open land of homestead properties.

By now I was loking forward to a lovely lamb dinner round the campfire – speciality of the van park we were booked into – and even when we were about an hour out and more rain came down again I didn’t mind too much as we were nearly done for the day – of course that feeling changed when we arrived to find it had been cancelled because of the rain.

So it was off down the road to a local pub, the historic Hotel Corones, for our evening meal and then home to bed and the dripping? (more like thumping) of water off the surrounding trees onto the cabin roof from the rain that came down during the night!!

If we are ever in Charleville again we intend to stay one night in that Pub/Hotel – talking to a couple we shared our table with at dinner (there were plenty of spaces in the dining room, sharing a table with other travellers is a way to find out about the roads ahead and places of interest) – anyway they were staying there for the night and told us about the old fashioned feel to the place and how comfortable the rooms were even if you did have to go down the corridor to use the bathroom and toilet!  They had been given a tour of the hotel when they booked in but were sad that nobody of importance had slept in their room!
Bye for now
Cathy

PS There is a statue in Cunnamulla erected as a tribute to a song writer and a muscian – I’ll tell you about it another day.
Cx

9 thoughts on “All systems go”