Tiny little daisies fill the vase this week
mainly Erigeron (Seaside Daisy) and also some Brachyscome (break o’day)
Do you know the origin of the word daisy?
The origin of the word Daisy is the Anglo Saxon “daes eage” which literally mean “day’s eye”. It was called this because daisies open at dawn as the day just starts to begin.
A Daisy symbolizes innocence and purity. It can also symbolize new beginnings.
Find out more here 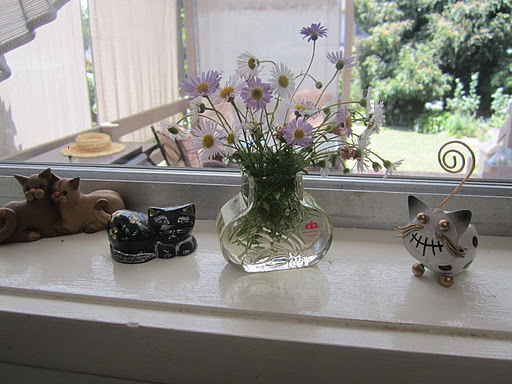 Did you notice Smiley with the curly tail has been joined by some new friends
The little one painted in black enamel is covered with daisies:))
Cats among the daisies lol
And here’s a closer look at these many petalled flowers
(Photos can be enlarged with a click)