This coming Monday is April 25th 2011 – Anzac Day
Anzac Day is a national day of remembrance in Australia and New Zealand, and is commemorated by both countries on 25 April every year to honour members of the Australian and New Zealand Army Corps (ANZAC) who fought at Gallipoli in Turkey during World War I.
It now more broadly commemorates all those who died and served in military operations for their countries.
http://en.wikipedia.org/wiki/Anzac_Day
http://www.awm.gov.au/commemoration/anzac/anzac-tradition/

One of my ancestors served at Gallipoli
unfortunately he died in France shortly after.
This is my tribute to all those who served and never returned home 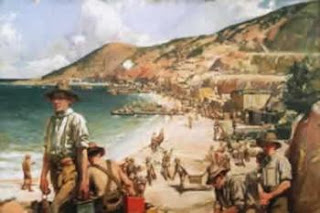 Edited to add:
This poem was obviously written after the infamous campaign directed by the British in an attempt to take Constantinople during WW1; a debacle that saw the landing of the Australian and New Zealand Forces at the incorrect location at Gallipoli, and which resulted in 11,000 Anzac casualties during the 9 months of fighting the Turks who were well entrenched on top of the steep cliffs at Anzac Cove and Lone Pine