As I was clearing up the casual outdoor crockery I thought how pleased I was we had decided on a very simple meal instead of some of the extravaganzas I’ve done in the past. It had been so lovely to see some of our children on Christmas Day – we spoke to some on the phone and had visits from the others.  The family who were away even changed their plans and drove home for a short while so they could be with us, which made it even more special.

This years decision for a simple Christmas also meant there was only one tree in the house and not the several others (including a big 7ft one in the lounge) that I often put round the house – ‘cose the grandchildren love to se them.  What was special was the fact that grandchildren didn’t notice I forgot to put a star on top of that small tree in the hallway lol 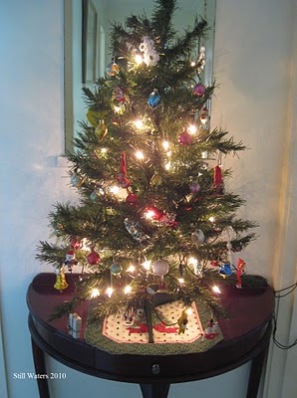 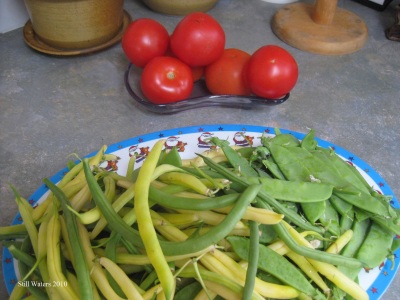 How I love those spur of the moment decisions to do something, When they had all gone and we’d eaten lunch we decided to take a drive – I had no idea where we were going ‘cept it was near Healesville – about half an hour away – off the main highway and down some small roads – into the forest and over a ford.

We ended up at Donnelly Weir –
a good choice, as you all know how much I love fresh air sunshine and water.

And how I love the fact that now the drought has come to an end and we have had rain there are loads of wildflowers in bloom
Like this Fringe Lily
http://anpsa.org.au/APOL2007/mar07-s2.html