Second Tuesday of the month
came round again
June 8th meant it was time
for an evening at the Folk Club
only this month there were no singing artists
just ones who love to speak in rhyme
Even though I revel in the sound of song and music
I have a great liking for the spoken word
So was really pleased with the this month’s theme
Bush Poetry was the go and what a night it was
Most of the spot acts in the first half
made recitations of their own original works
or those of other well known Australian poets
AUSTRALIAN BUSH POETRY
Australian Bush Poetry is poetry with good Rhyme and Meter that is written:
(a) by an Australian; and / or,
(b) about Australia, Australian people, places, things and way of life.
http://members.optushome.com.au/kazoom/poetry/bushpoetry.html
In the very early times of our country
it was a way for those who weren’t as literate as others
to tell a story in an understandable and imaginative way
It certainly was an art and is slowly making a comeback
Most of the Folk Festivals these days
would have sections for Bush Poetry
and there’s stiff competition to get a gig at them
Also at the competitions that are springing up all over the country
Anyway there were several there last week
who are members of
The Sunday ARVOS
and they were only to willing to take the floor
http://www.arvosbushpoetry.com/index.htm
One chap by the name of Stephen Whiteside
who has had several books of poems published
and this year was the winner of First Prize
in the Grenfell Henry Lawson Festival Verse and Short Story competition (Humorous Section)
was a great hit with us all
He is a lover of C J Dennis and this poem in particular
THE ANT EXPLORER
from
A Book for Kids
Once a little sugar ant made up his mind to roam-
To fare away far away, far away from home.
He had eaten all his breakfast, and he had his ma’s consent
To see what he should chance to see and here’s the way he went
Up and down a fern frond, round and round a stone,
Down a gloomy gully where he loathed to be alone,
Up a mighty mountain range, seven inches high,
Through the fearful forest grass that nearly hid the sky,
Out along a bracken bridge, bending in the moss,
Till he reached a dreadful desert that was feet and feet across.
‘Twas a dry, deserted desert, and a trackless land to tread,
He wished that he was home again and tucked-up tight in bed.
His little legs were wobbly, his strength was nearly spent,
And so he turned around again and here’s the way he went-
Back away from desert lands feet and feet across,
Back along the bracken bridge bending in the moss,
Through the fearful forest grass shutting out the sky,
Up a mighty mountain range seven inches high,
Down a gloomy gully, where he loathed to be alone,
Up and down a fern frond and round and round a stone.
A dreary ant, a weary ant, resolved no more to roam,
He staggered up the garden path and popped back home.
So he has set to
and produced another set of poems
called
The “Ant explorer” parodies
One he read was entitled
‘The Internet Explorer Ant’
Had us all in stitches
The main act of the evening was
Keith McKenry Well known for his love of poetry and ability to recite
also a desire to revive an interest in Austalia’s Lost Folk Songs
A slightly crazy performance poet, Keith has been delighting festival audiences for over 25 years. In concert, he interweaves original verse with bush poetry, presenting an amalgam of history, humour, and social comment that defies stereotype.
http://www.duckscrossing.org/shop/index.php?main_page=product_info&cPath=58&products_id=266
I like to sit at the back of the small hall
so I can see the artists face on but when we arrived
someone had taken our usual seats
which meant sitting down the front
but at the side
Couldn’t get a decent photo all evening
I think he forgot our side of the room 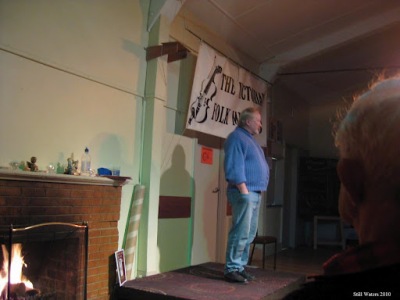 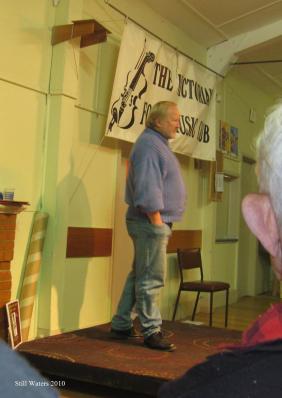 But to be truthful I was so engrossed in what he was saying
and trying to look over Bert’s shoulder
I nearly forgot take the camera out of my bag lol
Lots of interesting links here for you to look at
http://members.optushome.com.au/kazoom/poetry/bushpoetry.html
http://en.wikipedia.org/wiki/Bush_poet
http://www.cap.nsw.edu.au/bb_site_intro/stage3_modules/bush_poetry/bushpoetry.htm